Samson as the Strongman for God and Last Judge of Israel 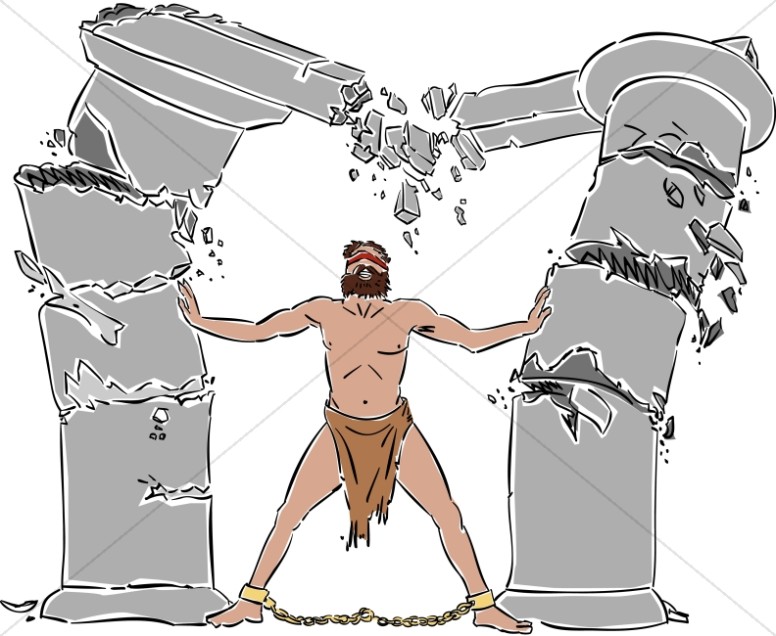 There was no one like him before him or after him. Although skeptics may dismiss the Biblical account of Samson as myth, God's Word is truth. Samson lived and did everything the Bible records. After the time of Joshua, during the time of the judges, Israel as a whole did what was right in their own eyes. This state of habitual selfishness and idolatry were the circumstances into which Samson came. Judges 13:1 and following sets the stage: “again the children of Israel did evil in the sight of the Lord, and the Lord delivered them into the hand of the Philistines for forty years.”

Manoah, of the tribe of Dan, had no children. His wife was barren, until one day when an angel of the Lord appeared to her. “For behold, you shall conceive and bear a son. And no razor shall come upon his head, for the child shall be a Nazarite to God from the womb; and he shall begin to deliver Israel out of the hand of the Philistines.” Samson would become the last, and perhaps most famous judge of Israel.

The vow of a Nazarite was a strict vow of holiness to the Lord. It is important to note that part of the Nazarite vow meant never consuming any wine or strong drink of any kind. Nothing from the vine could even be eaten, and no haircuts. The vow also included not touching any dead body, not an animal or human, even if a family member.

Now grown, Samson asked his father to go get a woman of the Philistines for his wife. Manoah did not know it was “of the Lord” and that Samson was “seeking an occasion to move against the Philistines.”

On the way to Timnath, a young lion roared at Samson. “And the Spirit of the LORD came mightily upon him, and he tore the lion apart.” (14:1-5) Samson's Philistine wife was used against him, and was given to another man. When Samson came to retrieve her, her father refused to let Samson see her, and offered his younger daughter. Samson declined. He had his own agenda. “Then Samson went and caught three hundred foxes; and he took torches, turned the foxes tail to tail, and put a torch between each pair of tails. When he had set the torches on fire, he let the foxes go into the standing grain of the Philistines, and burned up both the shocks and the standing grain, as well as the vineyards and olive groves.” (15:4, 5)

This action resulted in the execution of Samson' wife and father-in-law. The Bible says that then Samson attacked them “with a great slaughter.” In a futile attempt at revenge, the Philistines intimidated the Judeans, and sent three thousand men of Judah to capture Samson. Although he allowed them to bind him, when he got to the camp of the Philistines, “the Spirit of the LORD came mightily upon him; and the ropes that were on his arms became like flax that is burned with fire, and his bonds broke loose from his hands.” (15:14) Samson found a donkey's jawbone and proceeded to kill a thousand men. This incident understandably quieted the Philistines for awhile.

Samson loved Delilah, but the Philistines bribed her with big money in order to find out the source of his extraordinary strength. His love for her and her relentless prodding was his undoing. After deceiving her three times, he finally poured out his heart to her. “There hath not come a razor upon mine head; for I have been a Nazarite unto God from my mother's womb: if I be shaven, then my strength will go from me, and I shall become weak, and be like any other man.” (16:17) While he slept, she had his hair cut off and, having broken his Nazarite vow, God's power was gone. The Philistines gleefully put out his eyes and threw him into prison.

After his hair had grown out again he was brought out to amuse the Philistines on the occasion of a feast to their god Dagon. The spectators, more than three thousand, gathered in a building mainly supported by two pillars. Samson requested to be positioned between the pillars. “Then Samson called to the LORD, saying, 'O Lord GOD, remember me, I pray! Strengthen me, I pray, just this once, O God, that I may with one blow take vengeance on the Philistines for my two eyes!'” Samson pushed against the two supporting pillars and God again infused Samson with superhuman strength. The temple collapsed, killing everybody in it. (16:28-30)

Samson's supernatural strength was truly spectacular. That God would so endow a man with fantastic physical ability shows yet another side of the awesome God of Strength. God always supplies what is needed when it is needed. Even though Samson's life appeared to have ended abruptly, God used him in a way like no other. He is named in the Hall of Fame of Faith in Hebrews 11 as a one-of-a-kind man who believed God and fulfilled part of God's divine plan. His great reward awaits him in Paradise.