×
Give God Your Worries - He Will Carry Your Burden

Give God Your Worries - He Will Carry Your Burden

The Promise of True Rest for the Soul 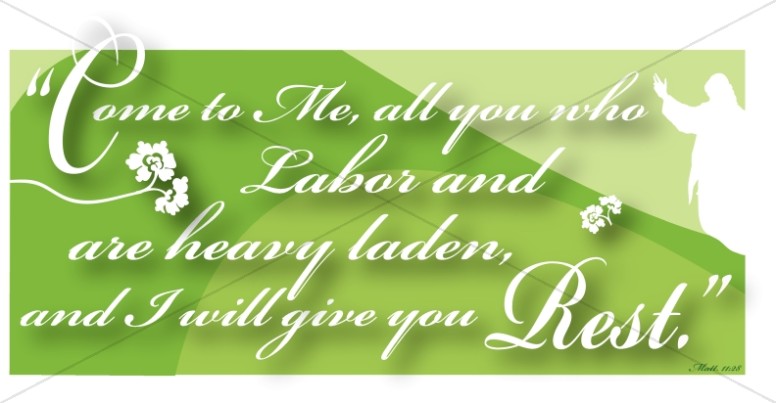 The world in which Jesus walked was that of tremendous bondage to the Law of Moses. For generations, the Pharisees and religious teachers were forcing the Judean citizens into subjection to the Law, even adding to them petty rituals and ceremonies. Many of the people remained disheartened and discouraged, unable to maintain the demands for literal and absolute obedience to every rule and regulation.

While that may sound extreme and even unthinkable, many Christians today live under the same bondage and don't know it. With dogged allegiance to traditional religious practices and habitual customs, many believers stumble daily beneath a load too great for them to bear. The frequent result of living a life under the weight of self-inflicted obedience is a weakened, ineffective Christian who will very quickly face spiritual burnout, even apostasy. All too often the question they ask themselves just before giving up is, “Why bother living the Christian life if it gets me nowhere?” The good news is that Jesus gave the answer. It was spoken 2000 years ago to a broken and dying generation, but its truth still calls out to the hurting today. It is found in Matthew 11:28-30.

“Come to Me, all you who labor and are heavy laden...” Jesus knew that the people of Judea were under the burden of strict obedience to the Law. He also knew they were overcome with weariness, their lives reduced to simply going through the motions. Their existence was not marked by peace. All they knew was their failure to make it work. With arms outstretched, the Son of God extended an invitation to all who were beaten down with condemnation and discouragement.

“Take My yoke upon you and learn from Me.” Just as a young oxen is teamed with an older, more experienced oxen to lead them in plowing the fields, so a believer is instructed to team up with the One who can lead them through a victorious Christian life. Who better to learn from than Jesus Christ, who holds the power over sin and death.

“For I am gentle and lowly in heart.” Although Christians are instructed not to become unequally yoked with unbelievers, Jesus Himself becomes unequally yoked when each Christian surrenders their life to Him. Because of His great love, Jesus humbled himself to die on the cross. Through His blood, mankind can be reconciled to God. He will not lord it over those who chose to follow Him. His humility and gentle nature are what make Him the Good Shepherd.

“And you will find rest for your souls.” The spirit of mankind can be easily turned away by the demands of religion. But the Son of God came to invite mankind into an intimate relationship with Him. Through this relationship, each Christian can find spiritual renewal as the peace and freedom that Christ offers waters their thirsty soul.

“For My yoke is easy and My burden is light.” The yoke that the believer takes upon themselves is the unity found in a daily walk with Jesus Christ. Matching Him step for step, they will find that He takes on the weight of life for those who rely on His strength. Likewise, the burden that they carry is simply the ability to live a life pleasing to the Father, an ability given by the Spirit of Christ living in and working through them.

Jesus Christ is the only answer, the only way to the Father. No human, in and of themselves, can ever be good enough to earn favor from God. God is not keeping track of how many Sundays a Christian is found in the pew every month. He is not watching the clock to count off the minutes during their prayers. He is not taking note of how well-composed and disciplined someone may appear to be. God does not judge a person by what is on the outside; He looks upon the heart. And a heart that is fully surrendered beneath the life-giving yoke of Jesus Christ, though they stumble, will not only receive rest and renewal in this life, but will be rewarded in eternity for a life well-lived.