Bible study on the book of Titus 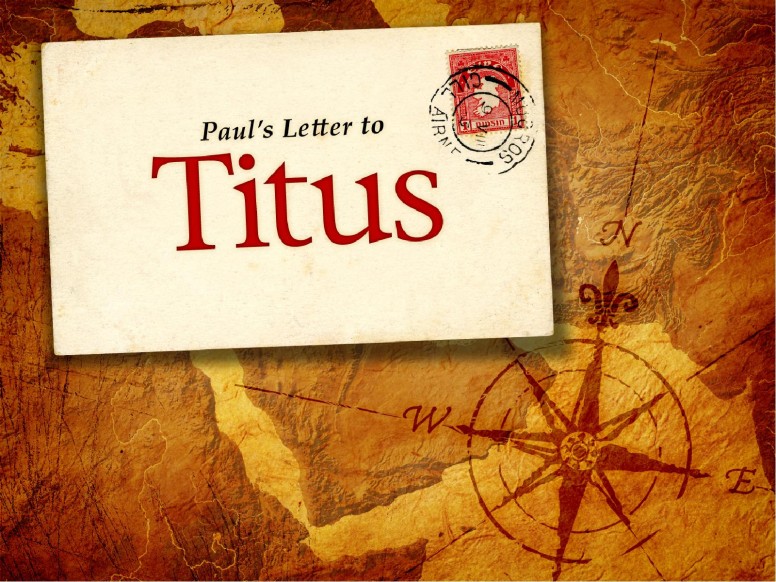 The book of Titus was written by the Apostle Paul during the first century church. It was written to Titus, a Greek, who was an uncircumcised Christian. Titus had accompanied Paul during his ministry in Corinth on his third missionary journey, even serving as Paul's representative to the church there. Titus was the one who delivered Paul's second letter to the Corinthian Christians, the book known as 2 Corinthians.

Titus, though uncircumcised, was a faithful follower of Jesus Christ and a steadfast helper to Paul. During Paul's brief ministry in Crete, it was determined that administrative order still needed to be established in the church. Yet, Paul desired to travel on to visit other new churches throughout the region. So Paul left Titus in Crete so that he would set the church administration in order and to appoint elders throughout the cities.

However, the church in Crete was up against the longstanding reputation of the Cretans: they were known as liars, evil beasts and lazy gluttons. Hardly leadership material. For this reason, Paul was compelled to write to Titus, to instruct him in the qualifications of spiritual leaders. Because there was spiritual opposition, Titus was going to need to be even more selective of those who were to be placed in leadership positions if the church in Crete was going to take root and flourish.

Much of the leadership qualifications mirror those found in 1 Timothy. Elders and bishops were to be blameless, a husband of one wife, and have obedient and faithful children. The bishops and elders were not to be self-willed, quick-tempered or given to greed or violence. Instead, they were to be hospitable, self-controlled and faithful to the Word of God. It was this kind of leader that could use sound doctrine to exhort and convict those who try to contradict the truth. However, it was evident to Paul that such leaders may be difficult to find, in light of the evil undercurrent that constantly threatened the spiritual welfare of the church.

This opposition was caused by Jewish legalists who resided in Crete. It was discovered that they were stirring up no small trouble among the Christians, preaching the need to follow the Law in order to be approved by God. These rebels boldly spoke against Paul's ministry in Crete, attempting to uproot the foundations that he had laid. They were well-known for their idle talk and their constant insubordination. Paul warned Titus against the troublemakers, commanding him to rebuke them sharply so that they turn from their Jewish fables to the true commandments of God.

Paul gave several charges to Titus, instructions for members within the church that were sure to prevent them from falling into legalist nonsense. Rather than spending their time engaged in disputes over genealogies and the Law, each member would do well to fulfill their God-given responsibilities within the church. The older men were to be sound in their faith, sober and exhibit patience and reverence. The older women were to teach the younger women how to love their husbands and manage their homes. The younger men were also to be sober, and to exhibit reverence and integrity. Overall, each member had the responsibility to obey those in authority, to maintain sound speech and live lives in humility and righteousness. While Paul instructed that the believers were not saved by their good works, their good works were to be evident to all because of the salvation they had received.

In his final closing thoughts, Paul reminds Titus of the generous gift of salvation that God made available to those who believe. Mankind on their own had fallen into complete spiritual depravity because of their sin. But it was the love and mercy of God that gave them the free gift of redemption. It is this generous gift that the believers were not to treat as common or invaluable by their endless arguments and rising insurrection. Instead, believers were to participate in things that were profitable to men, and in actions that edified the believers.

Paul knew that if there were problems among the leadership, those problems would filter down into the body of believers. Because of this, it was important to him that proper care needed to be taken when leaders were appointed. But first and foremost, Titus was to set the example of how the believers were to live. By his template of godly living, the believers in Crete could overcome their old rebellious habits, and learn to live and walk in obedience to God.